Getting ready for a career transition

Brian, an Assistant Vice President of Operations, had worked for a manufacturing plant for 10+ years. Brian had made significant operational improvements and had played a key role in turning around the business and positioning it for profitable growth. Unfortunately, despite his and his coworkers’ efforts, the decision was made to close the business.

Brian had not needed a résumé in many years, so he was unfamiliar with the “new” approach to résumé writing. Opening his résumé with an objective statement, he demonstrated that he needed a little education on how to strategically position himself for entry into one of the toughest markets in recent history.

Brian’s original résumé read more like a job description and was full of brief bullet points disseminating tasks and subtasks. He had taken some time to explore his accomplishments which he placed above the section titled Current Responsibilities; however, he had not understood the need to explore not only the results of some of his efforts, but the actions taken to achieve such results. Pages two and three of Brian’s original résumé (not shown) served as a very long list of positions and promotions going back to 1973 when he served in an entry-level production capacity. Within each section, there was no white space to differentiate positions and a standard presentation approach presenting his title, the years he held the position, one highlight of the role, whom he reported to, and two or three one-line bullet points explaining his “job.” Brian closed his résumé with an Education/Training section presenting his high school diploma from 1973 along with a “References available upon request” closing line.

To position Brian for success in a very tough market, he needed to elevate his presentation on paper and the value communicated in relation to his experience and current candidacy. To do this, focus was paid to both formatting and content.

For formatting, a unique design was created that felt “solid” and “powerful” in appearance to subconsciously position Brian in the correct light for readers. Eliminating the objective statement, Brian’s qualifications summary succinctly yet comprehensively communicates the highlights of his candidacy, his current career target, and his key differentiating factors. The goal of this section, just as with any résumé, is to provide readers with a few-second overview of the candidate to facilitate the screening process, secure interest, and glean additional screening/evaluation time.

For the content of Brian’s résumé, the presentation of his multiple positions with his last employer was streamlined to create a much more aesthetically pleasing, focused, and succinct overview of his background. By doing this, the “list” look and feel was eliminated. The new approach created the brevity needed to engage readers and allow for increased focus on select actions and results. Boosting the effectiveness of Brian’s résumé are the items presented in his Key Achievements sections placed after each employer on his new résumé. In these sections, bullet points are presented that explore the results his actions generated, providing readers with an overview of the value Brian was able to contribute throughout his career.

Brian had also presented two potentially disqualifying factors on his original résumé: (1) his age and (2) his lack of a college education. To overcome these factors, we presented information only back to 1985 on his new résumé—appropriate for a senior manager who is expected to possess a certain amount of experience to qualify for the role—and omitted his Education section, replacing it with a much more impressive Professional Development section.

Brian’s new résumé, through the new formatting and content approach, was just 2 pages in length with 1,100 words as opposed to his original résumé of 3 pages and 935 words, demonstrating the much more effective utilization of spacing, language, keywords, and prioritization on his new résumé.

Brian emailed us to communicate how pleased he was with his new image, stating, “I could not be happier!” 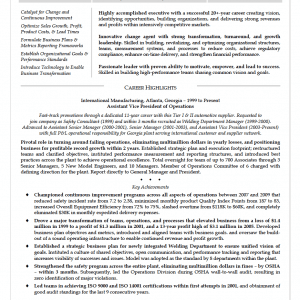