Resume Reinvention: Storytelling and its connection to your brand

I have received a lot of ‘Dear Sam’ questions lately from readers seeking to differentiate their brands and not understanding how to tell their own stories. Whenever a candidate begins telling me they feel they are differentiated based on education, employers they may have worked with, or credentials, I provide an anecdotal story of one of my most memorable clients and how we used storytelling to differentiate his brand. Keep in mind when you read Steven’s story, that when he first called me he felt his differentiating factor was his undergraduate degree. Read on and you will understand how that credential was not at the center of the story that needed to be told.

Meet Steven!
Steven met me at an event I facilitated, an event he attended in order to learn how to craft an effective resume. After listening to my presentation and further reflecting on how he was going to present his experience on paper, he decided to contact me for help.

Steven had a varied background, mostly in the fitness industry. He had served as a program coordinator with a local branch of the YMCA in addition to running his own gym and personal training business for 8+ years. Steven had recently returned to school to complete his undergraduate degree—a degree he had started many years earlier—when, all of a sudden, his life had taken an unplanned turn.

As an 18-year-old freshman college football player Steven was living his dream when, in a split second, his life changed forever. A fitness enthusiast, when Steven experienced heart-pounding pain during a practice session, he knew something was terribly wrong. Two days later and fifteen pounds lighter, Steven was diagnosed with kidney disease. Returning to his hometown, Steven underwent treatment and a kidney transplant. Four years later, Steven’s body rejected his sister’s donated kidney and Steven performed self-administered peritoneal dialysis five times per day for six years. Starting his days at 4 a.m., Steven spent 12 hours in his gym each day, returning home every 3 hours to perform the exchanges he needed to survive.

Still living with his “glass half full,” Steven was approached by a good friend adamant to donate her kidney for a second transplant. Discovering she was not a match, Steven’s friend researched and discovered a groundbreaking paired donation program at Johns Hopkins Hospital. Undergoing a successful second transplant in 2007, Steven emerged stronger than ever and once again lives a healthful life.

Steven’s Goal…
Steven wanted to share his story with others to serve as inspiration for those navigating life-changing medical diagnoses, and possibly even represent some of the medical companies that helped keep him alive. His resume needed to reflect this message while conveying his experience, education, involvement, presentations, and publications.

Steven’s Brand…
To accomplish Steven’s goal, I created a unique brand centered on the theme of “One.” I used this theme to convey that it only takes one moment, one journey, and one life to make a difference – in essence, to tell his story. For Steven, this provided him with the framework he needed to share his message. For Steven’s resume, I created something akin to a piece of marketing collateral, paying attention to both content and design. While Steven had limited experience, he had a very special story to share as well as an expertise level reinforced by his related involvement, presentations he had facilitated, and publications in which he was featured.

To give the resume a more polished “brochure-type” look, I also included logos of some of the places where he had delivered speeches or had been published, providing Steven’s resume with a third-party validation “edge” over his competitors. When coupled with the professional bio I wrote for Steven, he had a tool to sell himself for product representation, public speaking, and patient advocacy roles, helping him share his moment, his journey, and his life with diverse audiences. 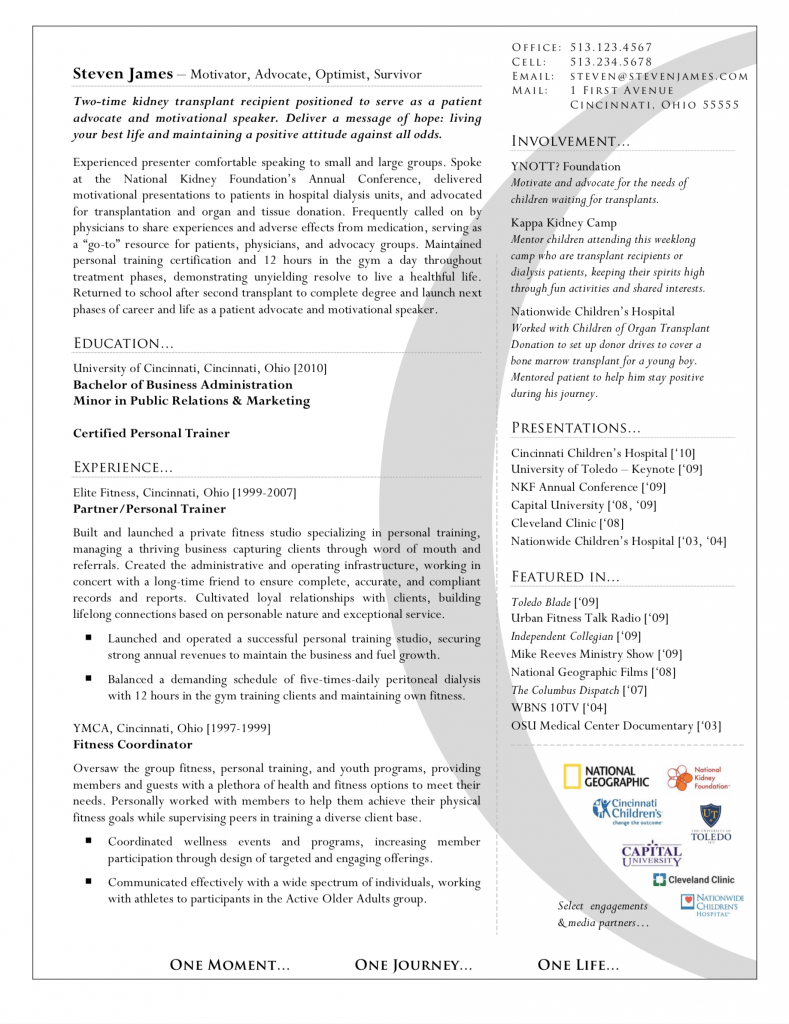